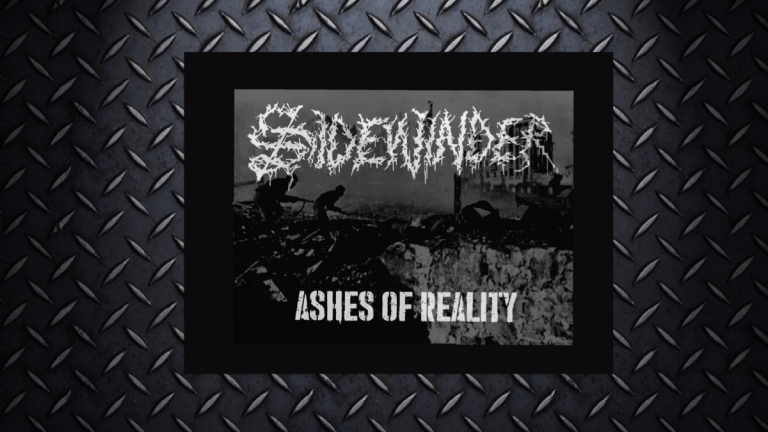 Here we have Sidewinder. No; not the dreadful 90’s indie pop band from Australia, but working class blackened crossover from Leeds, right in dear ok’ Blighty.

Blackened crossover is not a term you here often is the overstuffed pigeon holes of Metal, but if you look at the cover of this ep, then you’ll begin to understand. Black metal band logo emblazoned over the top of a black and white still from some far off battlefield.

From the get go of the title track, “Ashes of Reality” it screams CROSSOVER!!!!! For me, I hear DBC’s first album and a host of other late ‘80’s bands, but then the vocals kick in and I hear present day Madball. That’s the crossover covered; so where’s the blackened bit I hear you say! It comes at 1:05 on the clock and is a pure, unadulterated old school black/death metal bridge with blast beats and widdly, widdly galore, which brings us nicely to the chunky fists flying hardcore breakdown and ending with a flurry of furious Slayer-esque guitar shredding and frantic drums.

The second track; the unfortunately named, “Slut Drop”, (I know there’s a message there, I hope), is a slower, but dare I say, more aggressive song, where Sidewinder go for the old fashioned slow pummel approach to breaking down the listener. The song does finish with another wailing guitar and drum assault, so thrashers need not be disappointed.

Overall, this ep will appeal to metal heads and metal curious Punks alike and you could do worse than purchase this and support a band that come from the same part of the World as the legendary Ironside.