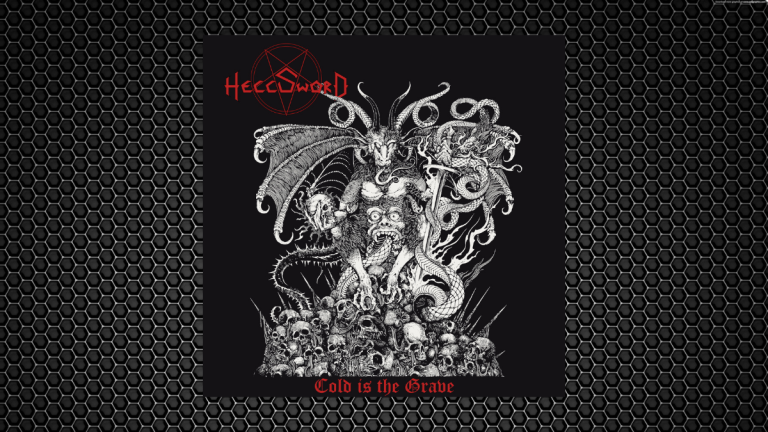 I assumed that this would be a record with more in common with power metal. Anything with the word sword tends to swing that way. But no, Hellsword are far removed from soaring vocal harmonies and rapid-fire melodic speed. Instead, Hellsword are rooted deeply in the early days of black metal; think Venom, Bathory and Hellhammer.

Formed in 2009, it’s taken the Slovenian trio of Mark Massakre, Mike Manslaughter and Ironfist over a decade to produce this debut full length release.  Apart from the ridiculous names, there’s plenty to enjoy here despite the lack of originality. It’s well produced, with a raw edge and prototype feel but avoiding that outside toilet production of the early 80s.

There are plenty of riffs from the Devil’s locker here, with a tempo that varies from blistering speed and thrash to more demonic overtures that slow things down yet retain all the demonic elements you expect. It’s unsurprising that Cold is the Grave features tracks such as Satan, Death and Fear, Baphomet’s Shrine and Unholy Reich – the band are pinning their flag firmly with ol’ Nick after all.

Whilst Hellsword may not intentionally have done so, they have thrown their hat into the ever increasing ring of blackened thrash that continues to emerge apace. If you like that gnarly, aggressive and full-on aural assault, then Cold is the Grave may well be an album you’ll fancy taking a punt on.

HellHellsword – Cold is the Grave was released on the 24/09 on Emanzipation Records https://emanzipation.dk/hellsword-cold-is-the-grave/