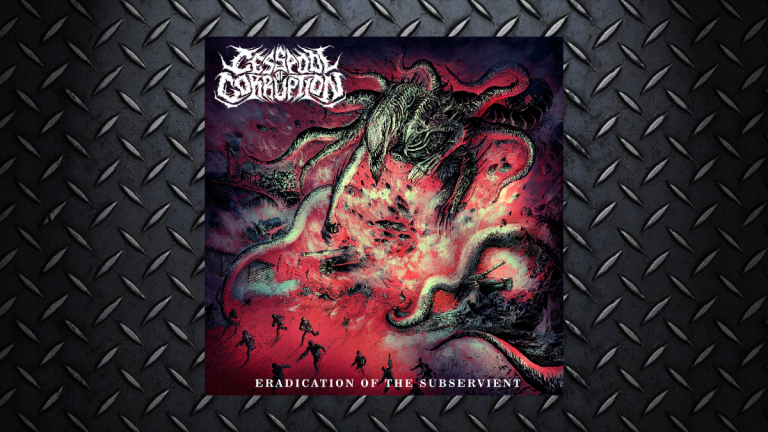 Formed in Dallas, Texas in 2012, Cesspool Of Corruption have been slowly building a name for themselves with their brand of brutal, technical and melodic Death Metal. Having self-released their debut E.P, Eradication Of the Subservient, during 2016 and then proceeding to sign to Gore House Productions, the band (comprised of Blake Humphrey on Guitar/Vocals, Matt Leach on Guitar, Mike Leach on Bass/Vocals and Brennan Shackleford on Drums) have decided that now is the time to give their debut an update. Eradication Of the Subservient 2020 is a remixed version of their debut release, offering fans and newcomers a chance to witness the bands music in a more polished manner. So how does it compare to the original? Does it breathe new life into this vicious beast, or does it feel like a Final Friday, beating a dead horse for all it’s worth? I guess we should find out!

The first thing to note is that this E.P does not beat around the bush. Ubiquitous Presence goes straight for the jugular with spine shattering blast beats, gut wrenching growls and crushing riffs. It’s a bold statement, showing that they’re hear to take no prisoners (feel free to do your best Dave Mustaine impression here) and that by the end of the run time, you will be battered, bruised and left beyond recognition. You have the usual Death Metal affair, trem picked riffs and chunky chugs  flirt with each other to devastating effect, with high shrieks contrasting the ungodly growls to give the listener an aural punishing. The mid-section brings some slamming riffs before opening up into an ominous, unsettling section. Some beautiful melody is used throughout and there is plenty of technically infused Melodic Death Metal riffs for techy nerds like me to salivate over. It’s as if The Black Dahlia Murder, Origin and Necrophagist had an orgy, and this is what was created.

Technological Enslavement brings much of the same. Excellent melodic riffs with plenty of technical flair, trem picked melodies, brutal blasts, savage double bass, demonic lows and banshee highs. It’s all here on full display. There’s an excellent guitar solo that really shows the insane talent this band possesses, and there’s some impressive bass during the chorus. Every member of this band is clearly talented and know how to play their instruments. There’s excellent use of heavy chugging during the mid-section, with mid ranged vocals making an appearance to break up from the lows and highs. There’s a really nice harmonic part after the solo that breaks the song down for a bit that I enjoy, offering a brief refrain from the brutality of it all. The song ends with one last burst of energy, leaving the listener battered. There’s still three songs left to go yet!

Track three, Emergence Of Truth, starts straight off but in a slower, Doomier manner than before. Instead of blasts and tech riffs, we’re met with something more sludgy, with some wonderful bass work underneath it all. It’s a welcome change of pace after the bludgeoning the previous tracks have made us endure but, fear not, as the song quickly shifts back into technical mastery of the highest level. There’s a great Melodeath verse, with blasts and shrieks upping the intensity. The song slows down for a darkly melodic chorus, offering a shift in emotions from the aggression of the verse to the sorrow of the chorus. There’s some brilliant harmony throughout the chorus, with more excellent riff work following on. There’s yet another incredible solo that transitions into some downright impressive sweep picking (which, as a Sylosis fan boy, I very much love) and melodic bass wizardry for added flavour. The melodic chorus closes the song out in moody fashion.

The title track is next (for those who haven’t been paying attention, this song is called Eradication of The Subservient), which opts to just demolish the listener from the off as we’re punched repeatedly by blasts and technical riff work. There’s some evil sounding trem pick majesty that gives off some Black Metal vibes, before more technical affair appears for the verse. There’s even more trem picking and even more blast beats, with some wonderful harmonic texture thrown in for good measure. There’s a neck-wrecking mid-section that is accompanied by dark melodies, making way for a brutal chugfest. The song breaks down so we can have yet ANOTHER glorious solo (because we can never have enough solos!), when we’re suddenly given a compete change of pace. The song shifts into a groove laden riff that is rife with technical flair, sending us to A&E for a neck brace during the process. The song ends with dark chords and heavy chugging, as one final punch to the gut.

The final track on the E.P is the longest, clocking in at a touch over nine minutes. Humanoid In Form starts the same way as much of the E.P already has. Tech riffs, blast beats and all-around pure mayhem. Brutal riffs, savage vocals and impressive bass lines take up much of the first third of the song, with some excellent minor chords thrown in to create tension and unease. It’s a no-hold-bars assault on the listener, pulverizing your senses with technical aplomb and some wonderful solo work. The solo has some great layers to it and guess what… THERE’S ANOTHER SWEEP PICKING SECTION. I’m a big fan of the sweeping. And of the harmonized guitars that follow. The song breaks down with picked minor chords layered over atmospheric chugging, with more excellent bass work to transcend everything to a higher level. Again, big Black Metal vibes. There’s also a great, simplistic headbang worthy section that leads into MORE SWEEP PICKING. I get very excited whenever I hear bands use sweeping, more bands should do it. There’s more technical savagery before the song breaks down AGAIN, this time into a slower, Doom laden affair. The constant contrast between styles and atmospheres serves the song well, making it feel far shorter than the track time suggests. Then we get to the highlight of the song, and the whole album. There’s more guitar solo majesty that is impressive to behold, before it trades off into a god damn bass solo. After all the wonderful bass flourishes throughout the E.P, it’s about time that we got a full-on bass solo and oh, is it worth the wait. It is incredibly good. I don’t even know if that is correct English but nor do I care as it is the only way to describe it. Best part of the album, 10/10. But if that isn’t enough to whet your appetite then there’s yet ANOTHER guitar solo! And guess what? It’s as good as all the other solos on this album. Shreddy, technical and melodic. The song fades with the Doom-y riff playing, as great drum fills, savage blasts and ferocious double bass ensure that the E.P ends in knock out fashion.

So, what did I think of the 2020 remix of Eradication Of The Subservient? Musically, I am a big fan. The vocals are brilliant, with gut-bursting lows, banshee shrieks that Trevor Strnad would be impressed with and some great use of mids to contrast throughout. The drumming is insane, utilizing blast beats, double bass and your standard skank beats to earth-shattering effect. When the drums do change, it is noticeable and helps to heighten each section. The riffs are complex and technical, but also catchy and melodic. There’s lots of melody throughout and plenty of changes to help contrast from the barrage of technicality that is thrown at you. The guitar solos are, as I’ve already mentioned, highly impressive. They’re shreddy, technical and melodic, with some wonderful layering throughout. And the Bass… Well, you know. I love it. It has some truly great moments during the whole run time of the E.P, topped off at the end with one hell of a solo. So performance wise, everything is great. Compositionally it is exceptional. They stick to a formula for the most part but then change things up just as you begin to settle in. So compositionally, it is excellent. All that is left is the mix which, as a remixed E.P, is the most important aspect. Having listened to both versions, I can say that the 2020 one is superior. It sounds larger, grander in scale. There’s an almost unworldly atmosphere to this version that isn’t prominent on the 2016 original. Everything sounds cleaner and it is far clearer too. You can hear everything with ease, with all the notes discernable and with each layer given room to breathe. Nothing in the mix sounds louder than anything else, instead everything works in perfect harmony. I hope that this is establishing a new era from this band and that we will hear more from them soon. I had never heard of these guys before but now I want to hear more. Being a big fan of Technical Death Metal and Melodic Death Metal, this is right up my street. Complex, melodic and punishing music, these guys have potential to go far and join other bands of a similar nature such as The Black Dahlia Murder, Inferi and Beyond Creation. If you too love your music fast, technical, melodic and destructive, then mark December 11th on your calendar. This is a release for you.