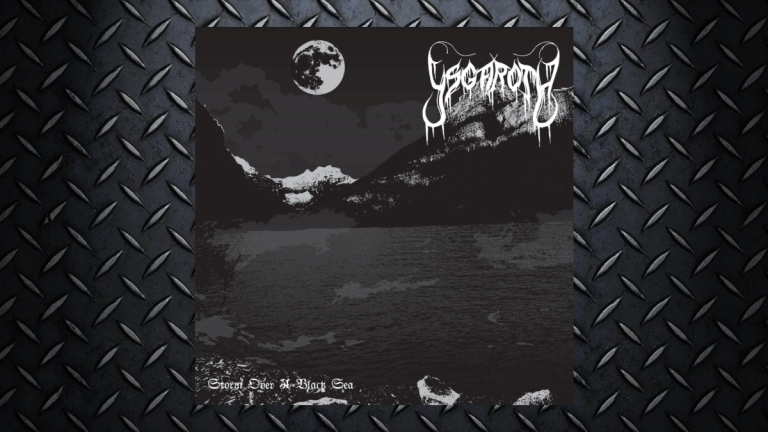 What with the (seemingly) deluge of Black Thrash Acts coming out recently, Hellfeckted, Hellripper and Devastator, to name but three. I was interested to check out the debut of Canadian metal band Ysgaroth.

Hailing from Vancouver this 3-piece are certainly a bit more on the Black side, rather than Thrash, Thashened Black metal if you will, rather than Blackened Thrash, and to be cruelly honest, I think that the crucial crux as to whether you like them or not will be the vocals. They are very much typical Black metal, screeching, wretched and certainly an acquired taste. Personally, the vocals aren’t for me.

Musically however, it’s a different story, the band blend different styles seamlessly into one original blend. There’s obviously lots of the aforementioned Black and Thrash, but there’s also Death, Traditional metal and more than hints of sludge and progressive metal, which certainly comes out during the instrumental passages that the band often adopts. And with 2 of the 6 tracks well over 10- minutes long, there are plenty of atmospheric, moody parts, which for me is where the band are at their strongest.

Intro ‘Rain’ for instance is terrific, moody, building with drums, bass and melodic guitars, before heading into first track proper, ‘Nam Gloria Satanas’, this builds from some piercing leads, that set the track up beautifully, before heading into the heavier part, this one has guest vocals from Jessie Grace from KOSM which add a bit more shade and texture (she also guests on another track ‘Forward unto Death’). The keyboard section is extremely well done and fits the track perfectly.

Each further track utilises great instrumental sections to add atmosphere and variation, all building to the conclusion of the release; the massive 17 plus minute ‘Deluge’ (featuring another KOSM member Erik Leonhard, who contributes lead guitar), which contains all the elements the band have used on the preceding tracks and creates their most ambitious song on the EP.

This is an impressive debut, with great songs, and ultimately, like I stated earlier, I think that most people’s judgment will be the vocals and will be the make or break on whether people will like ‘Storm Over a Black Sea’ or not. I say, give it a spin or two before making up your mind.