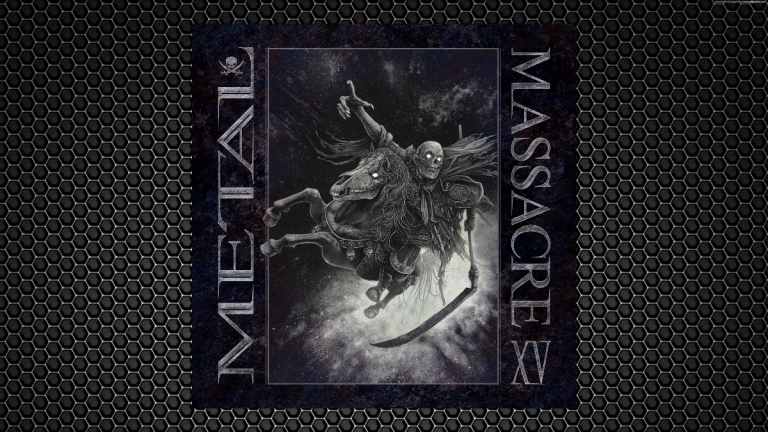 A long time ago in a galaxy far, far away….

Well, 1982 and Los Angeles to be precise, metal mogul Brian Slagel gathered together some tracks from the best unsigned acts on the L.A. metal scene and so Metal Massacre was born. Here we are 39 years later with the latest and 15th Metal Massacre offering.

A dirty old school thrash vibe, great riffs, love the whole feel of this track. If Venom and Motorhead is your thing then Midnight have you covered.

When you have a 4 minute slot on a showcase compilation it takes balls to use a track with a 1.5 minute intro, so you better be able to back it up. Poison Ruin back it up with gusto. Black metal production of N.W.O.B.H.M. Brilliant track.

Fuming Mouth kick off with a brutal DM opening then let the beat drop and proceed to batter the listener into submission.

All the subtlety of a brick in a sock. Face smashing music at its best.

Black Metal is not my cup of tea but this beautifully melodic and atmospheric track is an amazing piece of work.

Leave The Light Behind-Temple of Void

I can’t and probably shouldn’t categorise Temple of Void, they deserve their own little genre Beautifully weird metal.

I LOVE THIS TRACK.

Hell of an intro then a moment of calm to gather yourself before Ripped to Shreds unleash a head banging, head stomping barrage of riffs and blast beats at you.

For lovers of old school Heavy Metal with a new twist.

THIS IS A FUCKING AMAZING TRACK

In Somber Dreams-Mother of Graves

To end, some slow tempo Melodic Death to tug at the heart strings. Gorgeous tempo shift on the outro.

Over the years Metal Massacre has showcased Slayer,Overkill,Armored Saint,Ratt, Amon Amarth and not forgetting Metallica, and now, with MM XV, Metal Blade are highlighting some of the new generation of metal bands.

This album is a great listening journey though some of the contrasting and differing genres in Metal music today. A great album and definitely worth spending your pennies on.