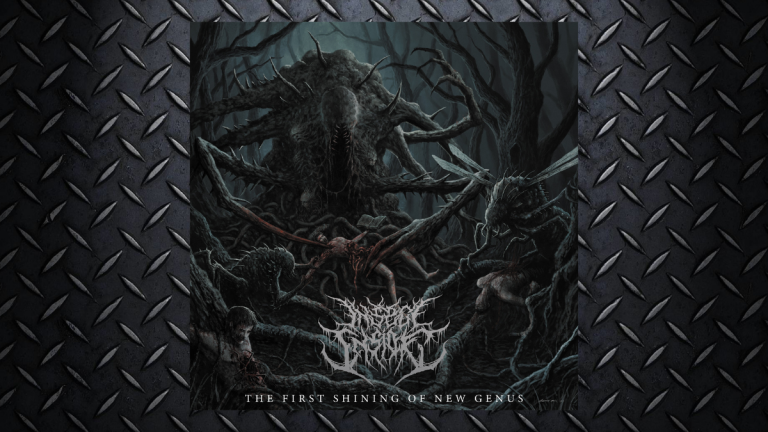 With a full length album set to release in mid-February, Insect Inside step forward to once again prove that brutal death metal is one of Russia’s main exports.  An intro and nine tracks and translate to a thirty-three minute hurl around an audible meat-grinder, which although might point towards another typical modern brutal death metal full-length, there are some extra flavours thrown in that set ‘The First Shining of New Genus’ apart.

While Insect Inside manage to nail all the necessary bits that modern brutal death metal demands, the main standout is the swung guitar rhythms.  Tracks like ‘Revival of Godly Deformity’, ‘For the Glory of the Swarm’ and ‘Posthumous Grief’ are all examples of when this type of groove kicks in – making these standout moments and showing some variation in the riffing  department (something that a lot of slam lacks nowadays).  While these swung rhythms are in no way genre-bending, the way they are implemented means that there is less emphasis on the more-or-less constant time signature, where some variety keeps the half an hour running time from seeming like an your entire Sunday afternoon.

Production is clean and modern as is standard for modern death metal.  This modern sound suits the low-tuned guitars, mainly guttural vocals and fast sixteenth-note double bass and gravity blast sections, working wonders for the clarity of the songs.  While it’s completely understandable to have grown tired of the same crystal-clear, clicky-drum production that’s been the industry standard for the last decade or so, it fits here; as brutal death bands seeking differing sounding production either lose clarity in the more intricate technical sections or just produce a guitar tone that is downright unlistenable.  With the production in mind, ‘Derelict Sanity’ is another standout track, where the bass intro (aside from being unexpected on the first listen) shows how the crunchy bass tone fits around the mid-centric guitars.  Having given the spotlight to the bass in this one track makes it more noticeable in ‘Evisceration through the Throat’ and ‘Embalming for Chrysalis’, where the guitars and bass trade off stabs of technical riffs that build to massive slamming breakdowns.

For the most part however, Insect Inside blast along the true-to-form recipe of chunky slams and tremolo picked death metal riffs.  Any band knows that the trademark features of a genre cannot be ignored in an attempt to make any kind of impression, where especially within the realm of brutal death metal there’s got to be an emphasis on sheer heaviness, speed and sickening lyrics.  ‘The First Shining of New Genus’ is essentially a blatant slab of brutality with no bells and whistles.  It is nice to be reminded of the corner of metal where there are no overly-complicated songs that are meant to be a reinvention of the musical wheel with preachy lyrics sung by people that are dead-set on trying to change the face of the world.  Listen to go to the warm, fuzzy place in your mind where brutality is the cure to all problems.