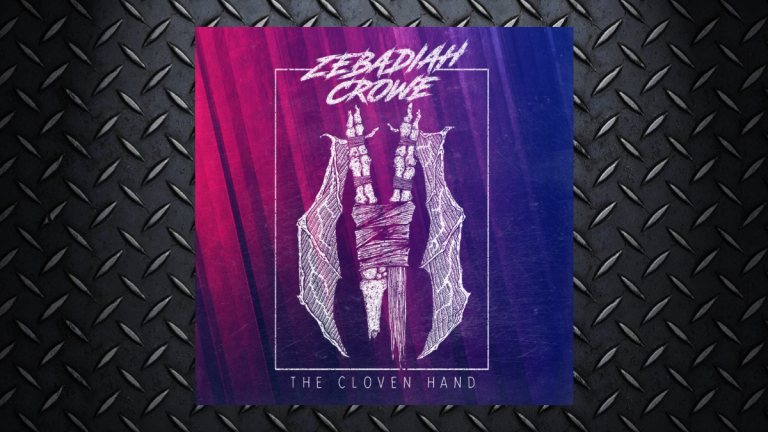 2020 has been an incredible year for music. There’s been so many different flavours of riff-based excellence this year that you’re almost spoilt for choice. For smaller bands, this means that it can be hard to get noticed unless you have something unique to you. With a description like “a vicious concoction of Black Metal, Thrash, Punk and Power-Violence”, Zebadiah Crowe are clearly attempting to stand out from the pack. This however, is not that concoction. Instead, it’s an Industrialised nightmarish version of Zebadiah Crowe, twisting and subverting all expectations with a 3 track electronic affair that wishes to grab hold and pull you into the suffocating darkness from which this devilish E.P was apparently spawned.

‘The Cloven Hand’ is made up of 3 remixed tracks, each track being taken from their album ‘Host Rider’, which was released in the summer of 2020. It allows the listener to look at the band from a new perspective, seeing how their already demented material can be turned into something even more horrifying if approached from a different angle. The E.P opens with ‘House Of Kira’, a song that sounds like it belongs on the Doom Eternal soundtrack. A haunting choir pulses at the forefront, with buzzsaw synths in the background applying grit and tension, before the song explodes into a volatile frenzy of guitars, drums, vocals and horns. An atmospheric lead is introduced before it breaks down during the verse, where The Horrid’s vocals take centre. The verse builds, paving the way to a dubstep-Metal hybrid, with pulsating synths that sound like they’re trying to carve their way through a horde of demonic filth. The song continues much the same, breaking down during the vocal segments but still maintaining the gritty edge to make the song feel cohesive, with the electronic parts pounding, upping the intensity after small reprieves.

‘Barrens Forge’ starts with these intense chants, underlined bysombre synths. A little voice-over makes way for the verse, with the vocals being at the forefront once again as the instruments in the background build tension and atmosphere. The difference between this and the previous song can not be understated. The first track is a visceral, energetic affair whereas this one is a dark, despairing, melancholic stare into the void. There’s less going on instrumentally but what is there works incredibly well. There’s a great synth melody that is played for most of the song that lends a truly 80’s vibe to the whole affair. It’s as if the band got hold of a forgotten John Carpenter score and decided to make it more Metal. It’s a fantastic contrast to the first song and is my personal highlight.

The third, and final, song on the E.P is entitled ‘Skull Shank’. The song title is incredibly fitting as this is the most intense song of the three. It never seems to relent on the energy, with a strong emphasis on the more Techno side of things. If you want a breather than good luck because this song offers none. Jungle Drum & Bass beats start the assault off with distorted guitars and screams providing the backing. The song builds with an extra layer of drums before the synths come in, with the main drums changing to a more straight-forward beat, the Jungle beat behind it adding another layer of adrenaline. The song occasionally breaks down a little, but don’t mistake that as the intensity being let up. Vocals, synths, drums and guitars all build to create a more metallic 90’s Techno floor killer, accompanied by another fantastic synth melody in the last quarter to end it on a high.

So with all that said, what do I think of this E.P? Truthfully, this sort of thing isn’t my cup of tea but I’m here to review products based on what they’re trying to be and not based on my personal tastes. And what this E.P is trying to be is something unique and fresh, offering a new way to look at what Zebadiah Crowe have to offer. I listened to Host Rider between listens of the E.P to see the massive changes to sound and style but this still sounds like Zebadiah Crowe. That’s something I admire. The band are clearly here to offer something unusual to diehard Metal fans and Host Rider and The Cloven Hand both do that. Host Rider is a Metal album that blends a lot of different ideas together, and The Cloven Hand is an Electronic E.P that blends Crowe’s unique Metal stylings with buzzsaw synths, 80’s inspired melodies, abrasive horns and haunting choirs. I should also mention the two other acts the band worked with for these remixes, Seething Akira (House Of Worms) and Gods of Ruin (Barrens Forge and Skull Shank) for their impressive collaboration, helping to give darkness to Crowe’s messed up vision. They truly showcase how versatile and unique their approaches are to remixes, as I imagine that this was no easy task. Crowe have another E.P due out in the new year, something I am very interested to hear. If it’s anything as unusual and complex as Host Rider and The Cloven Hand, then I’m sure it’ll grab my attention.

To conclude, this E.P isn’t for diehard Thrash fans. There’s nothing all that Thrash about it truthfully. However, if you’re open minded and are willing to try something a little different then I highly recommend giving this one a go as it’s a well executed piece of music and is a short listen. There’s something in here that you’ll find is to your taste if you are willing to dig deep enough. Crowe have a promising future ahead of them if they keep this up, so stand up and pay attention. They have such sights to show us.

The Cloven Hand is available from December 2nd.