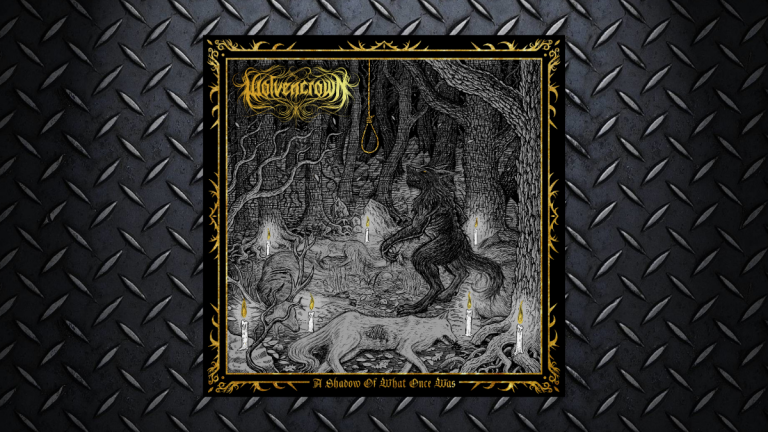 For those unfamiliar with Wolvencrown, their latest EP should be enough to address that. Three tracks of sweeping black metal over 18 minutes provide an opportunity to once more commune with nature.

The Nottinghamshire quintet utilising dynamic melodies and racing guitars to return to the times of primeval forests, a time when the wolves were the apex predator and when man dwelt in caves and rudimentary structures. ‘A Shadow of What Once Was’ conjures up images of forests bathed in moonlight, of echoing calls and ghosts who walk at dusk.

The interlinked Part I and Part II of the title track allow the band to expand and exploretheir sonic soundscapes, the tremolo riffing shimmers and quivers, mixing with swathes of thick layered keyboards that are integral to the band’s sound. Part I is the faster piece, whilst Part II completes the composition with frantic tempo changes, melancholic segments that haunt. The combination of ferocious explosive sections and gentle, melodicparts weaves together dramatically and provides an aural delivery that bothintoxicates and bewitches. This leads neatly to the mournful lament of ‘Coming to An End’, the epic seven-minute conclusion of an EP which is described not as a stop gap but as a doorway to new visions.

Expansive and yet simple, this is a strand of atmospheric black metal that Wolvencrown are slowly perfecting. Formed in 2015, Wolvencrown released their first EP in 2017 before their first full-length ‘Of Bark and Ash’ arrived in 2019. Their focus on paganism, nature and ancient battles places them at the heart of the UK black metal movement, standing tall alongside the likes of Winterfylleth, Fen and Wode.

This EP is a perfect reminder that the UK black metal scene’s heart continues to beat strongly, despite these dark times.

Wolvencrown – A Shadow Of What Once Was, is released on the 26th February 2021 on Clobber Records or via BandCamp HERE