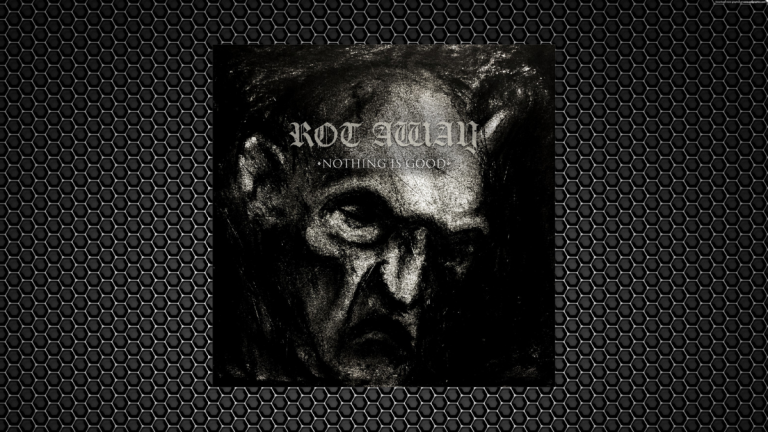 Hardcore….what is it good for…. power chords and D beats of course!! Asa checks out the new release from Danish HC band Rot Away, here’s what he thinks of Nothing Is Good…

Rot Away are a Hardcore band from Copenhagen, Denmark. The line-up (Jonathan Albrechtsen on Vocals, Christian Mattesen on Guitars, Ole Schwartz on Bass and Andreas Albrechtsen on Drums) are essentially a Danish Hardcore supergroup, with the members being quite prolific in their scene. Rot Away may be a new name, but the members have plenty of prior experience within the scene. They released their first self-titled E.P in 2019, followed by a single (‘Time Bider’) and a short live E.P, both released in 2020. Since then, the band have been working on their debut album, appropriately titled ‘Nothing Is Good’, and it’s pretty evident from the moment it starts that these guys are pissed off.

The album starts with squealing feedback and the building of drums as heavy, savage riffs fill your ears. These are the type of riffs that would get any Hardcore fan two-stepping in the pit. The song, ‘Rot Away’, is short, with a few gang shouts and Jonathan’s angry bellows occasionally exploding over the instrumentals. ‘Deadfriends’ kicks in out of nowhere, with a classic d-beat and open chords ringing out. The chord-based riff is fast, energetic and would get bodies flailing in an instant. It’s less than a minute long, charging headlong into sheer brute force before feedback greets us once more, leading into ‘Bad Way’, which has a slightly thrashier edge. Frantic riffing gets the blood pumping as the drums pound into your skull. The pace slows down as mammoth grooves get necks snapping before one final explosion of turbocharged riff work closes things out.

‘Hang Low’ is a slower affair, with a monstrous main riff that is infectious in all the right ways. The chorus is also equally catchy, with it’s easy to follow lyrics and simplistic phrasing making it a real earworm. The song gradually builds towards a disgustingly savage breakdown at the end that will no doubt cause utter carnage in a live environment. ‘No Apology’ goes straight for the jugular with a faster tempo during the verse and mid-paced grooves in between,  providing plenty of forward momentum for the album and contrasting perfectly with the slower songs. The halfway point is marked by ‘Atlas Fracture’ which has dissonant feedback, menacing open chords and pounding toms to slowly build us into the whiplash-inducing riffs that will surely cause lifelong neck issues if you aren’t careful. Things pick up a little towards the end before the earth-shattering breakdown deals a piledriver to the face.

‘Graves’ is the longest track on the album, clocking in at a little over 4 and a half minutes. There’s an unease to the overdriven chords during the intro that are slightly disturbing yet despairing. It’s wildly different from everything that you’ve come to expect by now, packing an emotional heft when everything fully kicks in. Jonathan’s performance sounds like that of a man in dire desperation. There’s a haunting quality that permeates throughout, with layers of guitar creating a dense, and often intense, listening experience. However, don’t worry if you think that there’s no more slabs of brutal Hardcore left as ‘Timebider’ grabs you by your throat and doesn’t let go. Dissonant notes ring out and are quickly vanquished by the skull-crushing grooves that make up the body of the track. There’s even some time for the bass to shine, with its gritty, crisp rumbling adding serious girth to the riffs. The slamming breakdown at the end has enough force to permanently contort the faces of anyone in a 10-mile radius.

The penultimate track, ‘Spitshine’ brings back some of the Thrash-infused vibes during the verse riff, something that wouldn’t feel all that out of place on a Power Trip or Enforced record. The song traverses its thrashy terrain with ease, leading to a ferocious two-stepper, monolithic in both size and sheer heaviness. The final track is ‘Prøv Igen’, a song that is no-holds-barred attack on the senses, with blistering d-beats and frenetic power-chord riff work claiming supremacy over your body. There’s a little more Thrash spice to add some additional flavour to this already-delicious slice of Hardcore savagery. All the trappings of classic HxC are on display, in all their delightfully menacing glee. One final show of dominant brute force erupts from the last two-step fueled breakdown and it’s over.

‘Nothing Is Good’ isn’t a completely accurate name as I know one thing for certain that is good, and it’s this album. Yeah sure, it’s not reinventing the Hardcore wheel, but Hardcore doesn’t need reinvention. What it needs are d-beats, tom builds, power-chord slammers, breakdowns, two-steps, a pissed off vocalist and a hearty dose of energy. ‘Nothing Is Good’ has all of this in spades. It’s 25 minutes of unrelenting, visceral mayhem with riffs that tear your skin clean off your face, leaving a bloodied, unidentifiable mess of mass behind. That isn’t to say there isn’t a little something extra here, as ‘Graves’ proves. The band can do a little more with the Hardcore formula if they please and they can execute that just as well as the usual suspects. The performances are all top notch, with everything being tight as hell. The guitars have plenty of crunch to add the appropriate level of devastation to the riffs, the bass is dirty and helps to beef up the guitars and lock in with the drums, the drums are crisp and provide the artillery bombardment to add to the destruction and the vocals are as angry and shouty as you could hope for from an album like this. The mix is also impressive, with everything sitting just right, allowing everything room to breathe if needed but locking in tight to keep things cohesive. Theirs’s no clashing of frequencies or drowning other things out, all the elements can be heard in all their glory.

In conclusion, Rot Away have provided a stellar debut album that provides all the thrills that makes Hardcore so fun to listen to. Put they do occasionally throw something new into the mix and that willingness to experiment takes them a slight notch above most of their peers. If you’re not a fan of HxC then this album won’t really do much to change your mind. However, if you’re like me and love d-beats, two-steps and gargantuan grooves then Rot Away have the perfect album for you. I’m looking forward to seeing what else these guys have in store for us, and so should you. Check out this album right now, you won’t be disappointed.